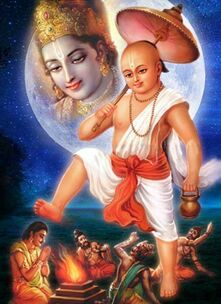 Lord Vaman is one of the 24 Avatars of Lord Vishnu. We mark the birthdays of the

devotees while on Earth.

The Story of Lord Vaman-ji and Raja Bali

These avatars are:
Raja Bali, the grandson of the great Bhakt Prahlad, had amassed great powers

through completing 99 of 100 Ashwamegh Yagnas that gave him three

indestructible weapons and powers greater than some of the Gods.

It was while Raja Bali was enacting the 100th yagna, that Lord Indra went to his

completed this final yagna. To help protect the Gods including her son, Aditi, Lord

Lord Vaman-ji who appeared in a tiny child like form as a priest, approached the

powerful Raja Bali as he was distributing land to the demons, and asked him to

allocate just a little land for the Devas. Lord Vaman-ji asked for the amount of land

equal to just three of his strides.

among the smallest of men, and three strides worth of land could surely cause no

loss to the demon king. Shukracharya, the guru of the devas, warned the self-

assured Raja Bali that he was dealing with the Lord himself , who would take

everything back from him, but Raja Bali would not listen, and in fact was cursed by

whole of the Earth, with his second the Sky and the heavens including Janlok,

humility and not wanting to go back on his word in the presence of the Lord said,

“Oh Lord, place your foot upon my head.”

loka, and thus he was unable to complete his 100th yagna and gain the powers he

needed to overtake the Gods.

Due to the demon king’s humility, devotion and graceful acceptance of defeat, the

Lord was pleased with Raja Bali and granted him a boon of eternal protection.

Like other Vishnu avatars, Lord Vaman would be easily pleased with offerings:
Devotees should chant the widely accepted Vishnu mantra “Om Namo Bhagwate

Vasudevah” 108 times and make offerings of the above items, especially Tulsi if