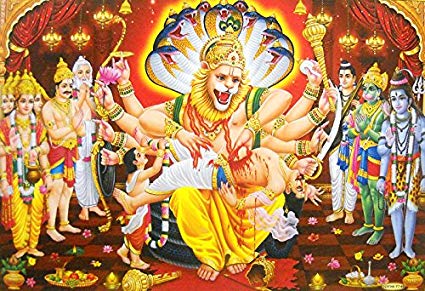 ​This year the month of Phalgun concludes usually in March with Purnima (the full moon).

This month was especially auspicious for two reasons, Maha Shivratri in the dark

side of the month, and the much celebrated Holi festival.

The day is celebrated with playing of rung/colours; spraying rung onto one another.

Singing and dancing to the beats of dholak is also part of the tradition.

Holika Dahan will be held on 12th March evening. On this day Hindus light or burn

Holi Pooja.Like most other Hindu festivals Holi denotes the triumph

of righteousness over evil.

The festival derives its name from Holika, the sister of an ancient demon King

Hiranyakshipu. She was set alight on this day with her nephew Bhakt Prahlad in her

lap. Despite a boon to be unharmed by flames, Holika did not survive the fire, but

- Sweets made out of ghee

Lord Narsing is one of 24 reincarnations of Lord Vishnu. Although he is not

worshipped as commonly as Lord Ram and Lord Krishna, he is regarded as one of

the four main reincarnations (the others being Ram, Krishna and Vaman), because

they came to protect their bhakts (devotees).

His form is half human half animal. This form was necessary to kill King

(or murtis) after Lord Visnu’s reincarnation

from a pillar as Lord Narsing.

form], at 6.00pm sharp being neither day nor night. He destroyed Prahlad’s dad,

authority, i.e. being above God. King Hiranyakshipu had stopped everyone from

worshipping God, and had turned everybody towards recognising him as the

The King had tried to get his own son Bhakt Prahlad killed a few times, due to the

fact that Bhakt Prahlad disputed his dad in his claim for supremacy over God, and

continued to worship Lord Vishnu and embrace Hinduism in its entirety. This

from spreading the word against his own father.


Some of the means he employed were:

- Throwing his son off a mountain

- Drowning him in the sea

- Having him burnt by his sister Holika,

But Bhakt Prahlad’s devotion (bhakti) was so strong that nothing would harm him.

Lord Vishnu emerged, in the form of Narsing, out of the same pillar (khambh), and


killed King Hiranyakshipu. Lord Narsing derived his name because of his form being

killed the King in the twilight hour (not day, not night), on the entrance of his palace

court (not inside, not outside), over his lap (not on earth surface, not in the air),

using his lion-like claws (not with weapon, not without a weapon). These special

material world. The boon was that King Hiranyakshipu could not be killed by a man

or a beast, with a weapon or without a weapon, during the day or the night, indoors

or outdoors, on the earth or in the air.

It was while King Hiranyakshipu was performing his tapasya, that his wife Queen

Kayadhu, who was already expecting their child (Bhakt Prahlad) was sent by the

Vishnu. As she was learning, so too was her son, Bhakt Prahlad, absorbing all this

great knowledge whilst still in his mother’s womb. As the boy grew up he had

unshakable shraddha and bhakti towards Lord Vishnu, despite his father’s

megalomania and attempts at intimidation.


Bhakt Prahlad was considered very divine, and he still is today, because at such a

tender age he challenged his dad’s ways. Where as the elders in King

that with such unselfish devotion and faith in God, through all hardships and

calamities we will be protected and that no evil, however strong, can conquer

righteousness and the immense grace of God.

tendencies, of conceit, greed, hatred and lust and all impurities. After all it was only

Holika tried to kill him there.

It is believed that Lord Ram in Tretha Yug celebrated Holi on this day, and so did

Lord Krishna in Dwapar Yug. Holi, as it is celebrated today with much colour,

Hiranyakshipu and crowned Bhakt Prahlad as the new ruler of the Kingdom.

King Hiranyakshipu. It was then that all the Gods and Goddesses went to Lord Shiva

and asked for help. Lord Shiva first sent his Bhairo form and then later his Virbhadra

and ashes from the dead Holika. Since then devotees have diversified their

​celebrations by playing Holi colour in a variety of different types (rung).