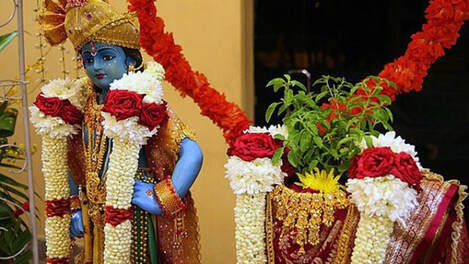 Tulsi Vivah festival is the symbolic wedding of Sri Tulsi-ji to Lord Vishnu. Tulsi Vivah is


Each year devotees, organizations, and temples perform this ritual with all pomp and glory

of a real wedding. Tulsi Vivah is an age-old tradition and is mentioned in the Padma Purana

and other ancient scriptures. Tulsi, or the Holy Basil, is the sacred plant of the Hindus and

symbolizes purity and is famous for its medicinal properties.

This made King Jalandhar arrogant and he declared war on other kings, demi gods and

While King Jalandar was away on a battle mission, Lord Vishnu went/approached Vrinda

disguised as Jalandar. She mistook him for her husdand and they lived like "husband and

wife" for a while.


​Soon Jalandhar was killed in a battle and Vrinda came to know about it. This made Vrinda