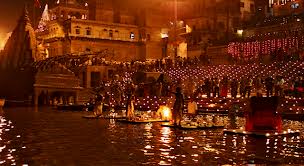 We have had our Deepavali, the festival most celebrated

by Hindus the world over.

Now it is time for Dev Deepavali – Deepavali for our

The Kartik Purnima which this year falls on the same day

[7th November] is also referred as Dev Deepavali, because this is the day Lord Shiva-

ji destroyed Tripura Asura and restored peace for our many Devis and Devtas.
​

Celebrations of Dev Deepavali are most prominent in Varanasi, Sri Shiva’s favourite place on

Earth, and home of the first divya Shivling, Vishwanath.

This is the day our Devis and Devtas descend from their Loks to Varanasi. It coincides with

the final Kartik Snaan in Ganga River in parts of Northern India or snaan in other holy rivers.

During Kartik Snaan – devotees are encouraged to bathe in holy rivers around India, or

where practical in their own countries. In parts of Varanasi devotees hold Deepavali-like

celebrations - light diyas/deepaks and fire crackers to welcome the Devis and Devtas.

Purnima, as mentioned is the finest day for worship, making offerings, japa and recital of

holy granths (scriptures)to please all our Devis and Devtas.

On this day of Kartik Purnima, it is considered the best of them all because of this month’s

significance to both Lord Vishnu, Lord Shiva and various other Devis and devtas. The day

marks the end of a month, full of celebrations from Karva Chauth, Deepavali, Govardhan

from being drowned in the oceans by the demon Sankha Asura.

day after celebrating Deepawali. It is the day after Sri Ram returned to Ajoydhya after 14

years in exile with his wife, Sri Sita-ji and brother, Latchman.

Named after ancient king, the Vikram Somvat begins on this day and so we're now into