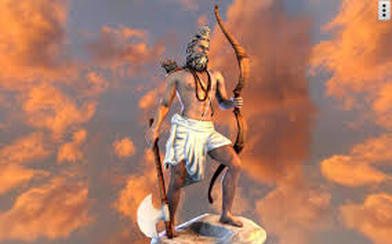 of Sri Hari Vishnu - that of Parshuram in the form of a Brahman and Sri Narsingh.

(fish), Sri Koorma in form of a tortoise and Sri Varaaha (boar).

third day of Shukla paksh, bright moon side of the month of Veishakh). Being the

sixth avatar of Sri Hari, he gained prominence by bringing his mother, Renuka back

to life after attaining a boon from his father, Jamadagni - who ordered her being

brought back to life. Parshuram's father, Jamadagni was later killed by King

eliminate all kshatriyas from earth. So he succeeded for a while until all traces of

kshatriyas was wiped out of earth.

Earth from adharma. Sri Kashyap rishi later came to earth and after a conflict with

Parshuram ordered him to leave and reside on a mountain, Mahendra.

It is often argued that because of illegal use of power with his axe (parshu), ill fate

yugh - when he faced Sri Ram during dhanush yagh. It was when Sri Ram - another

actual fact a high form of Sri Vishnu himself, Sri Parshuram bowed to him and