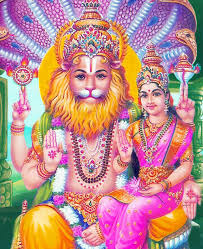 This months, Veishaaki - the traditional Hindu New Year's month - we mark the

animal, half human, at 6.00pm sharp being neither day nor night.

He destroyed Bhakt Prahlad's father, King Hiranyakashipu because the King had

declared himself to be the absolute authority, i.e. being above God.

King Hiranyakshipu had stopped everyone from worshipping the Lord, and had

turned everybody towards recognising him as the authority above HIM.

The King had tried to get his own son Bhakt Prahlad killed many times, due to the

fact that Prahlad always disputed his his claim for supremacy over God, and

continued to worship Lord Vishnu and embrace Hinduism in its entirety.


This frustrated King Hiranyakshipu and he tried various means to get rid of his son,

and thus stop him from spreading the word against his own father.

Sri Hari Vishnu emerged, in the form of Narsingh, out of a pillar (khambh), and killed

King Hiranyakshipu.
​
Sri Narsings derived his name because of his form being half human, half animal.

hour (not day, not night), on the entrance of his palace court (not inside, not

outside), over his lap (not on earth, not in the air), using his lion-like claws (not with

weapon, not without a weapon).

The boon was that King Hiranyakshipu could not be killed by a man or beast, with

weapon or without a weapon, during the day or the night, indoors or outdoors, on

the earth or in the air.

Bhakt Prahlad was considered very divine, and he still is today, because at such a

orders and had started worshipping him.