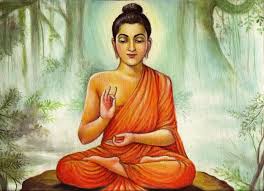 To mark the birth of Sri Budh-ji, the full moon day (purnima) of Veishaki month this

year. It was on this day, that Sri Buddh was born and it also

the day that he disappeared after 1000 Purnimas (full moons).

Sri Buddha - though worshipped more predominantly outside of India than locally -

was born, gained enlightment and found nirvana - on this day.

of King Shuddhodana, of Kapilavastu, at the base of Himalayas.

As a royal prince he was brought up with the best of everything, and his father

made special efforts to ensure his son would become a great ruler.

So the King did his best to steer the boy in the direction of a ruler, rather than

towards the austere path of an ascetic.

When the young prince Siddhartha asked to see the city one day, the King ordered

that the city be made to look bright and happy for the boy's viewing, so that

However, while the prince was being shown around the city he happened to see

amongst all the brightness and happy people, an old man, with no teeth and

emaciated limbs, crippled by his condition.

Siddhartha asked Chenna his charioteer what was this sight before him. Chenna

told him that we will all end up like him. Just as that man was once full of youthful

vigour, we will one day grow old as he has.

This experience of seeing the old man put Siddhartha into a pensive mood. To

tours of the city, where he subsequently saw a sick man, and a corpse on its way to

the funeral pire, and on his last tour he saw the tranquil form of an ascetic who had

conquered all desires and attachments and reached enlightenment.

Siddhartha's charioteer Chenna described all these sights to the young prince,

explaining to him the fragility and vulnerability of the human condition.

parents, his wife and young son, and all the luxuries of the palace, and seek

answers to the mysteries of life. He left the palace on a full-moon night and roamed

meditation and contemplation, until on Veishak Purnima he achieved enlightenment

at Bodhgaya under a pipal or Sacred Fig tree.

He was from then onwards known as Gautama Buddha, or enlightened one.

enriched by Lord Buddha's teachings, which encouraged compassion to all and

discipline of the mind in pursuit of enlightenment. Indeed Lord Buddha is revered

around the world as a great teacher by both Hindus and non-Hindus.

Thus His birth, enlightenment and death are all celebrated on this same day.

alike. And Sri Buddha's message of compassion and peace continues to shed its

On Buddha Purnima special effort is made to help those beings who are suffering,

and avoid cruelty of any kind. Lord Buddha particularly dismissed acts of animal

sacrifice and other forms of cruelty as impediments on the path to enlightenment,

and causing unnecessary suffering to all.
​
Sri Buddha's message to the world: love, peace and compassion for all. .