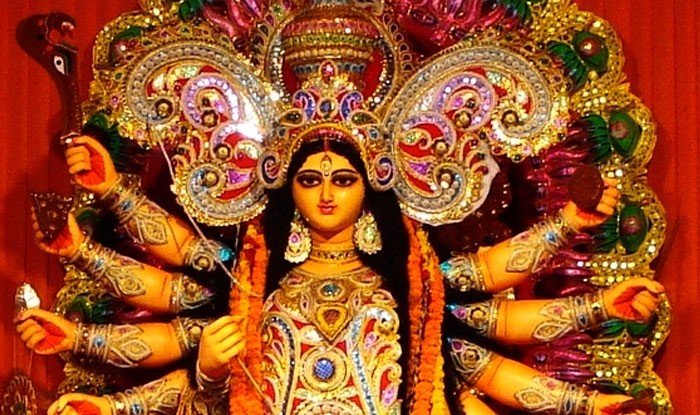 material. It is a time of purification through strict fasting and seeking divine

Often referred to as Shradhiye Nav Ratri, this festival is predominant among Hindus

Punjab. It starts a day after the Pitra Paksh Shradh amavasiya on the first day of new

moon of the Ashwin month and runs to the ninth day.

is March during the births of Sri Ram and his three brothers. Both the Nav Ratri can

lunar calendars could make this festival a day short or even a day more.

to seek their blessings.

Lord Shiva's wife, Devi Parvati, Kali or as Ma Durga - she is worshipped during the

(adi shakti - highest strength). Celebrations and fasting during these days are

sacrifices during these days, we ask ma Durga to destroy our sins, deficiencies and

prepare us for the year ahead.

Lord Vishnu's wife, Ma Lakshmi is prayed to during these days for shanti (peace),

abundance and bliss (prosperity). Wealth is not the only aspect of life that Ma


Lakshmi governs, she also aids in basic things like families, friends and food.

7th, 8th & 9th nights of Nav Ratri
​
Brahma's wife, Ma Saraswati is giver of knowledge - education and ability to use it

for a proper living in life. Knowledge in all aspects is obtained from Devi Saraswati -

what is dharma and what is adharma.

During the last days of Nav Ratri, Kanya Puja is also observed - where nine young

girls representing the nine forms of Goddess Durga are worshipped.

This is the day, Sri Ram destroyed Ravana, the demon king of what is now Sri Lanka.

referring to Diya. Ladies place a Garbha Deep in the middle as a symbol of shakti/

by the men. It originated in Gujarat and dances are performed in similar fashion in

Mata are sung from early night till the dawn of the next day, however recently and

particularly in western countries - Jagran is held to midnight.

of fast on fruits and milk.