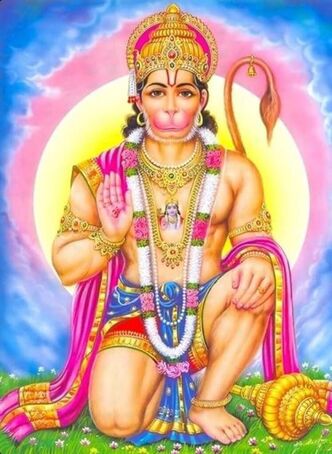 Rama. Every temple of Sri Rama has the murti or idol of Sri Hanuman. On Chaitra

purnima day, we will observe Sri Hanuman Jayanti - marking the birthday of Sri


Born as an avatar of Sri Shivaji, he manifested himself as the most ardent of bhakts

of Sri Ram during his reign in tretha yugh. Sri Hanuman was born to Ma Anjana and

Pita Keshri after blessings given to Keshri-ji by honoured rishi, Kashyap.

of his mentor on his chest.

Sri Ram gave a boon to Sri Hanumanji that in kalyug, he would be worshipped in

at places where Sri Ramayan is recited.

times he is displayed by himself - showering blessing to his followers.

He is also known as Bajrangbali, Pawansuth (one who was blessed with special

powers from the Pawan Devta, God of Wind), Sankat Mochan (One who takes your

troubles away) or Mahaveera (the greatest hero).

He is the living embodiment of Ram-Nam. He was an ideal selfless worker, a true

Karma Yogi who worked desirelessly and dynamically. He was a great devotee and

an exceptional Brahmachari or celibate.

He served Sri Rama with pure love and devotion, without expecting any fruit in

return. He was humble, brave and wise. He possessed all the divine virtues.

He had devotion, knowledge, spirit of selfless service, power of celibacy, and

desirelessness. He never boasted of his bravery and intelligence.

Lord Rama Himself said to Sri Hanuman, "I am greatly indebted to you, O mighty

hero! You did marvellous, superhuman deeds. You do not want anything in return.

Sugriva has his kingdom restored to him. Angada has been made the crown prince.

Vibhishana has become king of Lanka. But you have not asked for anything at any

time. You threw away the precious garland of pearls given to you by Sita. How can I

repay My debt of gratitude to you? I will always remain deeply indebted to you. I

give you the boon of everlasting life. All will honour and worship you like Myself.

honoured first. Whenever My stories are recited or glories sung, your glory will be

sung before Mine. You will be able to do anything, even that which I will not be able

with much fervour. His other favourite days of worship are Tuesdays amd Saturdays.

PawanSuth Hanuman jay. Bhakti to Sri Hanuman teaches as how to find and use the

unlimited powers within us. His undying devotion in Sri Ram bhakti is a clear lesson

to all of us of putting everything possible in achieving bhakti

In her previous life, Sri Hanumanji's mother was Punjikasthala and she was cursed

birth to a reincarnation of Sri Shiva. She was reborn as Anjana and performed many

yaghs to please Sri Shivaji - who finally granted her that boon.

It is often believed that in the events leading upto the birth of Sri Ram, when Sri

Agni Dev offered kheer (sweet rice) to Raja Dasrath, an eagle took some away and

dropped the rice in the waiting hands of Ma Anjana. After she took the divine