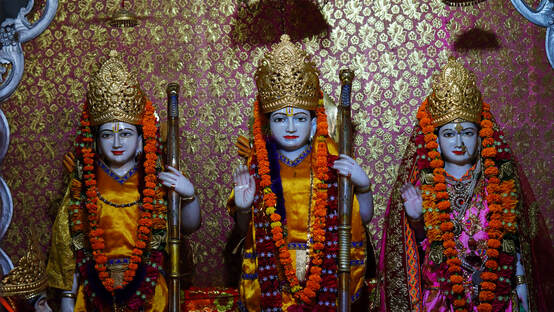 ​How can a wedding held thousands of years back be remembered so pompously in today’s age?

It the love Hindus have for Sri Ram, an avatar of Sri Hari Vishnu who during his 11,000 years on earth 🌎 earned a reputation as an idol.

He became an idol to those parents who want a son like him.

He became an idol to those girls who would want a husband like him.

He became an idol to those brothers and sisters who think a brother like Sri Ram would be the best thing that can happen to them.

He became an idol to all disciples who think a guru like Sri ram who put them on such a great path of spirituality.

He was just too perfect a human being - everything he did or said during his time of earth is widely spoken about among Hindus all over.

So it is no surprise that every place he visited or spent during his stay in the vanwaas years - 14 years of exile - has become a holy shrine and commonly visited by devotees.

On December 1, Sunday devotees will observe Sri Ram’s wedding to Dev Sita, daughter of Ma Earth but raised by King Janak and his wife Sunaina of Janakpur in Nepal.

So much enthusiasm and celebration is poured into re-enacting this wedding even in today’s time.

Please enquire at a local mandir to you of any celebrations or join us at Sri Shani Sankat Mochan Mandir at Oxley Park, NSW for Ramayan parth on vivah anniversary.
Also witness seven married couples renew their vows on this day.
​
Contact
Pdt Davendra Sharma on
Ph: 0414 560 424
or + 61 414 560 424 (from outside Australia)